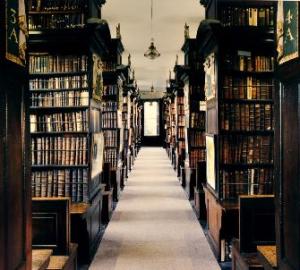 This week’s seminar on early modern print and authorship took place in Marsh’s Library, Dublin. This was a particularly interesting class as the resources of Marsh’s Library helped to bring the lecture topics to life. On of the most engaging topic of the day was the exploration of the relationship between handwritten marginalia and the layout of the printed book. This evolution could clearly be seen by examining the books themselves. Firstly, there was a sixteenth-century grammar school textbook, Ioachimi Fortij Ringelbergij Antuerpiani Rhetorica (1554), which had both interlinear marginal handwritten annotations – a record of early active reading. Another type of development of the book could be seen in Ben Jonson’s Volpone (1607) which contained a handwritten list of contents. This was inserted before the idea of genre has really developed, so it was interesting to see that it was listed alongside other comedies and tragicomedies. This also illustrated the fact that books continued to be developed after they were printed. This in turn led to printed marginalia, which could be seen in a 1601 version of Ovid’s complete works. The verse itself was situated in the centre of the pages surrounded by the marginalia, which would have been compiled from a number of sources and supplied to the print shop to assemble.

The library also contained A complete collection of the historical, political, and miscellaneous works of John Milton (1698). This is quite a unique copy in that it sets Milton up as a canonical author. The text is set up almost as a commercialisation of the author. This can be compared to the way in which the production of the Folios of Jonson and Shakespeare also operated in a commercial manner. This raises questions about the role of the author in the early modern period and the importance of authorship. The printing of these Folios was revolutionary in that up until this point printing was reserved for high status documents such as historical, religious and legal documents. The trip to the library ended with a very informative talk on book preservation from the Conservation Binder.

This week’s seminars concentrated on the theme of authorship. It was interesting to research the idea of late medieval vernacular authorship with regard to Chaucer’s presentation of his status as an author. During the Middle Ages there was not a clear sense of authority in the English vernacular. Texts could be adapted for different readerships and contexts, and each scribal version was different. The discussion on dramatising female speech was also quite engaging. This seminar focused on the female voice in Elizabeth Cary’s The Tragedy of Mariam. This play begins with a female soliloquy, which was quite unusual at the time. This sets the tone for the rest of the play which goes on to question the patriarchal culture of the seventeenth century. Cary questions issues surrounding the the triad of virtues associated with the “ideal woman” – silence, chastity and obedience. There is a strong emphasis on the connection of language and voice to promiscuity throughout, and this is connected to the idea of gender and authorship, and the place of women’s writing in a patriarchal society. The Tragedy of Mariam is useful in examining the female voice and opinion on these social restraints, but it is also interesting to compare this with the male viewpoint in William Shakespeare’s The Taming of the Shrew. Shakespeare similarly questions the male patriarchal system and concludes his play with as much ambiguity regarding personal opinion as Cary does. 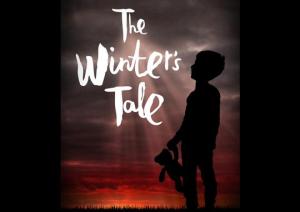 Corcadorca’s production of The Winter’sTale proved to be both magical and artistic. The combination of acting ability, lighting, imagery and musical score come together seamlessly. The magic of the play is captured in subtle ways such as the use of projection screens to produce a holographic sprinkling of snow over the stage, and the voiceover of time personified. These same projection screens are also cleverly used to display Apollo’s oracle:

Hermione is chaste;
Polixenes blameless;
Leontes a jealous tyrant;
his innocent babe truly begotten;
and the king shall live without an heir, if that
which is lost be not found.

Time itself is also ever-present in the form of a suspended clock positioned high over the stage, but always in view. The difficulties ofthe play are also well-handled. The transition of time is paralleled with the transition from tragedy to comedy. The play effortlessly moves from the almost monochromatic court scenes to cheerful pastoral second half, while still maintaining coherency. The famous stage direction Exit, pursued by a bear is adapted well here. The shadowy shape-shifting bear helps to subtly change the play towards the direction of the comedy which largely occupies the second half. This comedy is brilliantly displayed by Autolycus,the shepherd and the clown, although at times the clown over-played the simplicity of his character. Overall, a well-executed production that overcomes the complexities of The Winter’s Tale to produce something both magical and masterful.